Back In The Saddle Again

Monday – Met Dave and Louise Fong for lunch at Sachi Sushi.  Dave and Louise are relatively new grandparents who get to travel all the way to NYC to see grand-baby Murray.  Looks like our trip to NYC will coincide with their up-coming visit so we are looking forward to meeting them next in the big apple.

After lunch Robin went for a walk around the neighborhood with some of the TAGG (Terra Alta Greenwich Girls), Marlene Pearson and Nancy Cilenti.

Afterwards, we went to visit Tom and Jocelyn Lewis and their Golden Retrievers Dave, Ronnie and Shelby.  So much fun and so much fur!  Maybe one day we’ll take a couple pups home with us……..

Finished the night (and a bottle of wine) with Marc and Amy Badain, fresh and tan from their trip to the big island.

Tuesday – Jamie and Lucy Johnson returned for dinner….this time they brought Josh along.  Lucy decided the evening would end early (poor thing) but we had a nice visit.
We dashed across the street just in time for dessert with our neighbors, Sarah & Jeff Eddings who recently completed a beautiful new kitchen remodel.

Brady, Derrick, and Casey Eddings in their new kitchen

Thursday – Had breakfast at the Oakland airport and watched the first half of the World Cup match USA vs. Germany.

Breakfast Burrito and Oatmeal at the Oakland airport!

Arrived at Chicago’s Midway airport, picked up the Range Rover (started right up) and drove to the Four Points in West Lafayette, Indiana.  Had dinner at Applebees (no picture…haha) and called it a day.

That brings us to the present.  West Lafayette is home to Purdue University so we drove out to the campus for lunch.  Purdue sits on yet another gorgeous Big Ten campus, filled with many interesting red brick buildings, tree lined greenways and peaceful parks.  We learned that Purdue offered the very first college-credit flight training courses in the country and that Amelia Earhart was a member of the faculty back in 1935.

Arrived at the Four Points in Columbus Ohio earlier this afternoon.  Settled in and drove to “The Ohio State University” (yet another gorgeous Big Ten campus filled with many interesting red brick buildings, tree lined greenways and peaceful parks) for a quick tour and dinner at Cazuela’s on High Street.  Some tidbits on OSU:  It is the country’s third largest campus, and alumni include Jack Nicklaus, Jesse Owens, and George Steinbrenner (who was a graduate assistant under coach Woody Hayes…..seems about right.). 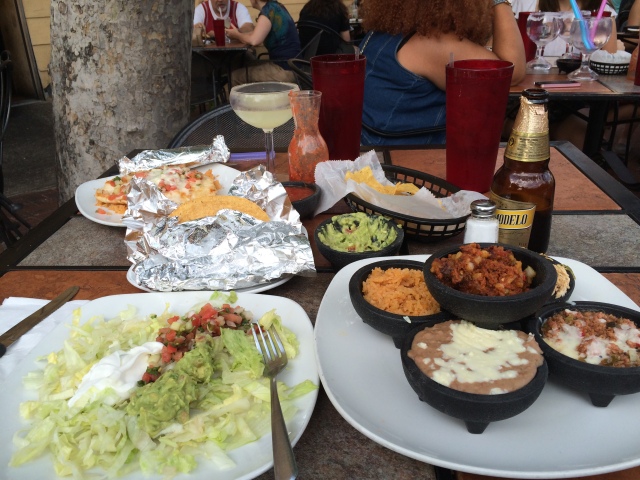 Off to Pittsburgh tomorrow.  It sure is great to be back in the saddle again!

This entry was posted in California, Indiana, Ohio, Uncategorized. Bookmark the permalink.