Arrived at the confluence of the Allegheny and Monongahela Rivers (forming the source of the Ohio River and providing a nice location for the city of Pittsburgh) late Saturday afternoon.  On our drive to Pittsburgh we stopped for lunch at Bear’s Den in Cambridge, Ohio. The restaurant had a comfortable log cabin atmosphere, complete with lots of taxidermy from bears (of course) to huge deer and elk.

Bob and a bear

The restaurant is located on U.S. Route 40 which happens to be a National Road created in 1806 as the first federally funded road. While waiting for our food, I checked the internet for Pittsburgh weekend schedule of events. Turns out the Pittsburgh Symphony was having a performance celebrating the work of Marvin Hamlisch that night.  Thanks to the wonders of the Internet, we were able to purchase tickets on the spot.

The drive into Pittsburgh was surprisingly pretty as this part of Highway 70 traverses the western part of the Allegheny Plateau, providing wonderful hilly scenery and a lot of long tunnels through mountains.  Continuing through Ohio we were surprised that we traveled through the northwest panhandle of West Virginia before entering Pennsylvania.  Guess we better brush up on our geography!

We entered Pittsburgh through the Fort Pitt Tunnel which travels beneath Mt Washington and then across the Fort Pitt Bridge. Surrounded by three large rivers, the downtown area, also know as the golden triangle, is dotted with numerous yellow bridges. It really is quite a sight as you exit the tunnel.  Definitely much prettier than one might expect. The city has done a great job of erasing the old steel production image, referred by some locals as “hell with the lid off”, to become the “Paris of Appalachia”. Can’t really comment on the Paris comparison (it does seem to be a bit of an oxymoron) but “City of Bridges”, yet another nickname, does seem a proper fit. 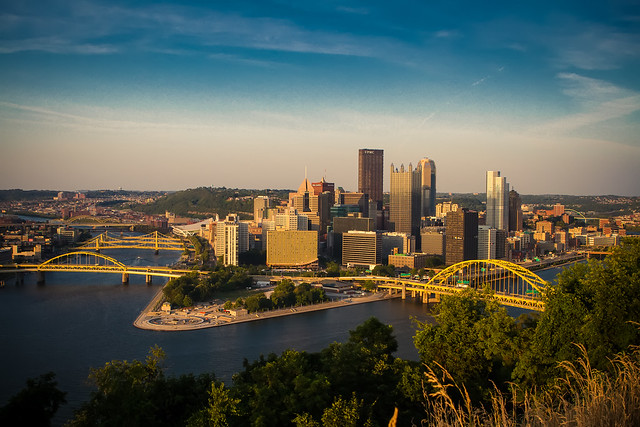 We settled into our room at the Westin, freshened up, and took recommendations for dinner from the hotel concierge. We decided on Seviche, a Latin tapas restaurant which was delicious.

Next stop was the symphony at Heinz Hall. Heinz Hall is a beautiful performing arts center in Pittsburgh’s Theater District.  Originally built in 1927 and restored and renovated in 1971, including its one ton chandeliers, the hall is home to the Pittsburgh Symphony Orchestra, which for many years claimed Marvin Hamlisch as it’s Principal Pops Conductor.  The performance was very entertaining and a well deserved tribute to Hamlisch’s incredible career.

On Sunday we got in a quick workout at the hotel and set out for a day at PNC Park to watch the Pittsburgh Pirates vs the NY Mets. The ballpark is located just across the Allegheny River from downtown. The city closes the Roberto Clemente bridge to motorists during game days which allows fans an easy and beautiful way to walk to the game.  The ballpark  opened in 2001 and has a great view of downtown Pittsburgh. We saw a great game in fabulous seats (thank you William & Adam) while enjoying the views of the city.  The home crowd celebrated a win too!

We only had peanuts and a beer at the game so we were hot and hungry and in search of a good quick meal. Primanti’s was the perfect fit. Primanti’s is a Pittsburgh tradition founded in 1933.  The chain is known for its signature sandwiches of grilled meat, an Italian dressing-based coleslaw, tomato slices, and French fries between two pieces of Italian bread.  We can now say we ate a Primanti sandwich.

We went for a long walk after dinner!

Monday we arose early for our drive to Lancaster PA, but first we had a stop to make. Some of you might remember we visited Frank Lloyd Wright’s home in Arizona, Talieson West. Located about 1 hour outside of Pittsburgh is Fallingwater, a home designed by Wright in 1935 and listed as one of the best all time works of American architecture. We took a guided tour of the house which is now owned by the Western Pennsylvania Conservatory. The house is built over a waterfall and there is a strong emphasis placed on harmony between man and nature. Unfortunately we were not allowed to take inside pictures on the tour. We recommend you visit this museum next time you travel through PA.

We arrived in Lancaster PA around 5:30pm and checked into a lovely B&B named King’s Cottage, a gorgeous mansion built in 1913. We sampled the Inn’s fresh apple cider, “wet bottom” shoo-fly pie, and lemon meringue pie. All delicious! We only had a few hours until sundown so we quickly hopped back in our car to begin a CD narrated auto tour of the Pennsylvania Dutch Country.  Our auto tour took us through the beautiful green rolling farmlands.  It was close to dinner time so we saw many Amish returning home from their day in the fields.  We passed lots of horse drawn buggies driven by very young Amish boys.  As we passed some boys and girls walking home, they all nodded or waved as we passed.  We were told not to take pictures of them as the Amish people forbid individuals from posing for photos.  Their society values humility, and posing for pictures is a sign of pride that calls attention to oneself.  Needless to say, we couldn’t resist taking a few photos for the blog.

Our B&B hosts strongly recommended that we stop at the Lapp Valley Farm for homemade ice cream.  The dairy raises Jersey cows which produce the richest milk for ice cream.  They don’t use any hormones or other unnatural products to increase milk production.  By now it was close to 7pm and we hadn’t eaten dinner, but how could we not stop for just a little taste of this ice cream?  We were barely able to find a parking space among the other cars and horse drawn buggies in their parking lot.  Unfortunately, there was a line out the door.  But wait, no problem…we went through the drive through lane which only had one vehicle in front of us, a horse drawn buggy picking up 6 gallons of milk for their family.  We have never tasted such rich flavorful chocolate ice cream.

In line at the drive through (or trot through?)

We had dinner at Miller’s Smorgasbord Restaurant, established in 1929 and serves traditional Pennsylvania Dutch food.  We both enjoyed a variety of dishes from their buffet, including fried chicken, shrimp, mac & cheese, and of course amazing pies.  By the time we finished stuffing ourselves it was almost dark outside.  We stepped out of the restaurant to see thousands of fireflies.  Turns out the firefly or  Photuris pennsylvanica is the state insect of Pennsylvania since 1974. Growing up in the Midwest, these lightening bugs brought back childhood memories of our summers.  Apologies to our friends who are not familiar with these bugs.  We tried to take photos but it didn’t work but the video we took is OK.  Here is the link:

We made it back to our B&B for a quick nights sleep before our long drive to Boston. Arrived yesterday……will blog on our trip to Bean Town in a few days…..right now we have to get going to the Cubs game!

This entry was posted in Pennsylvania, Uncategorized. Bookmark the permalink.

1 Response to Plethora of Pennsylvania Pleasures