Nursing colds and with the weather turning blustery, we decided to hunker down in our hotel room and devote a couple of days to resting, drinking a lot of tea, and planning future Old Home destinations. After all, with nothing planned beyond January it was time to make some decisions and get something on the books.  However, after a few minutes of discussion we changed directions (again) and instead turned our focus to May and a pending trip to Maui with my sister Linda and the kids.  We  currently have a trip planned at our timeshare in Kaanapali in late May and have been toying with the idea of extending that trip if we could find something affordable through VRBO.  As we started doing our research, we began to realize that going to Hawaii post spring break is relatively inexpensive…..so the trip started getting longer and longer.  Three days of planning later we now have 5 weeks booked and one more pending!  Too bad we won’t be able to take the Old Home with us.

In between all the tea drinking and VRBO research, we did manage to visit a few fine restaurants…

Fish and Shrimp Tacos and Ahi Salad at Shoreline Cafe

..and kept up with our Christmas tradition of seeing a movie (Exodus: Gods and Kings) and getting Chinese take-out for dinner.  Wait, correct that………the Chinese restaurant lost our order (they were a total mess, completely unprepared for this particular Jewish tradition) so we left empty-handed and had Domino’s pizza instead (where they charged us twice for our pizza….so that kind of makes up for the Chinese dinner we ordered but didn’t have). 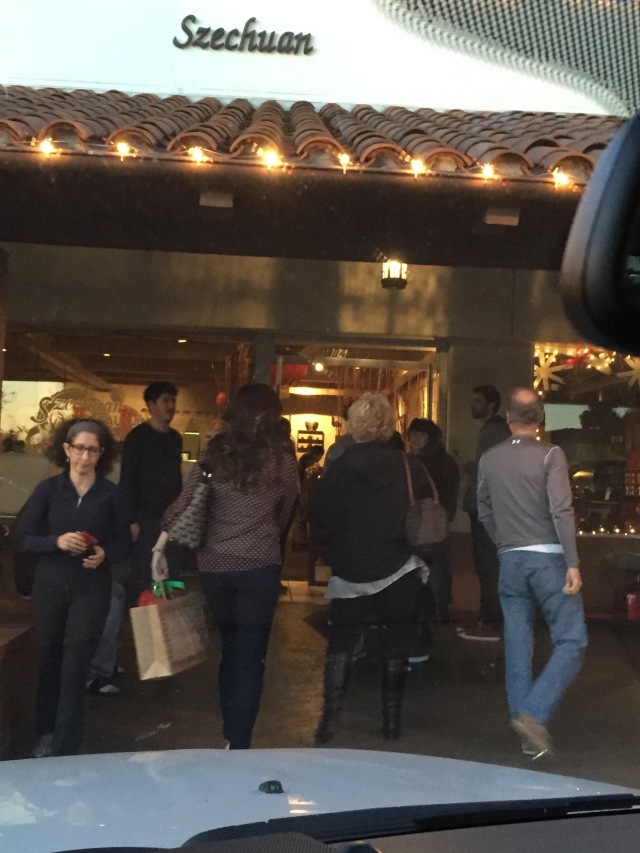 Feeling much better on Friday I went for a nice run along the ocean and Robin went for a long walk to see the Old Mission Santa Barbara.  Friday night we went out for Chinese (finally). 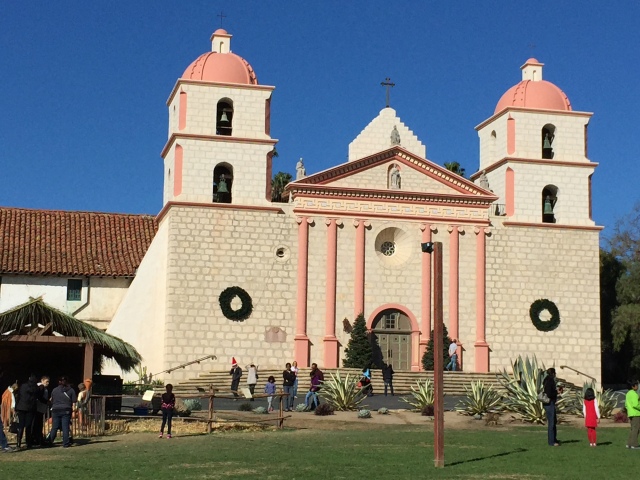 Saturday was bright and sunny so we rented bikes and road the trails to a bird sanctuary and then up the coast to the cliffs above Santa Barbara City College.  We passed by this huge fig tree, planted in 1876.  It is one of the largest of its kind in North America as it measures over 41 feet in circumference.  Oh, and we also finally made it to Sambos for breakfast!

One of us ate healthy, one did not…. 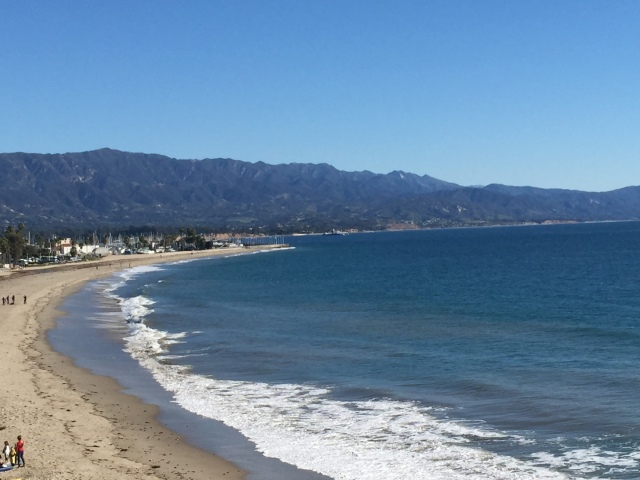 Santa Barbara beach viewed from the bike path on cliffs

Had great Cioppino for our final dinner at The FisHouse (thanks for the recommendation Ryan).

Sunday we bade farewell to Santa Barbara and headed to San Diego, where we will be spending the next four weeks.  The San Diego trip started with a stop at the airport to pick up Emily.  Emily decided that since she had already joined us in Savannah, Boston and Seattle, a visit to San Diego was in order just so she could say she saw us in all 4 corners of the country……guess she gets that kind of thinking from me.

Our place in San Diego is located in an area called the East Village, which is located just east of the more famous Gaslamp Quarter.  We are staying in a loft just a few blocks from Petco Park (home of the Padres).  Too bad it isn’t baseball season!

It has been a couple of busy days with Emily: 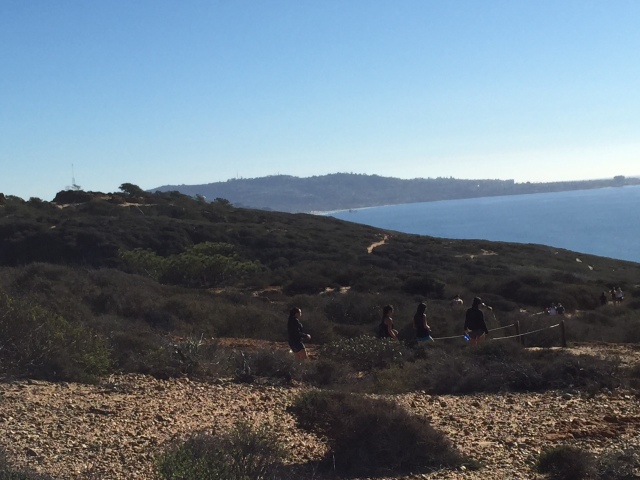 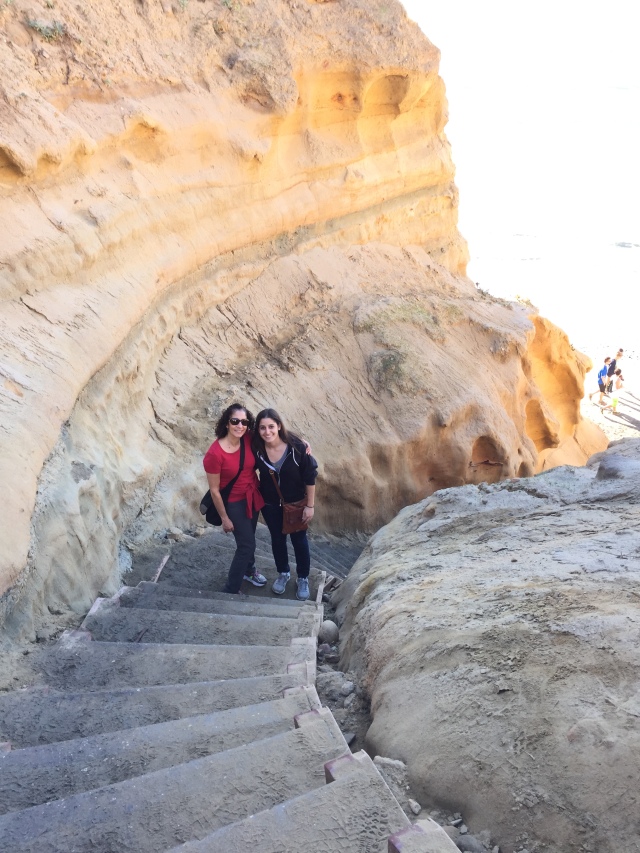 Hiked the beach back to the car. Just made it back before high tide!

Went to La Jolla for a great sunset

Playful Golden on the beach…..ah, the memories 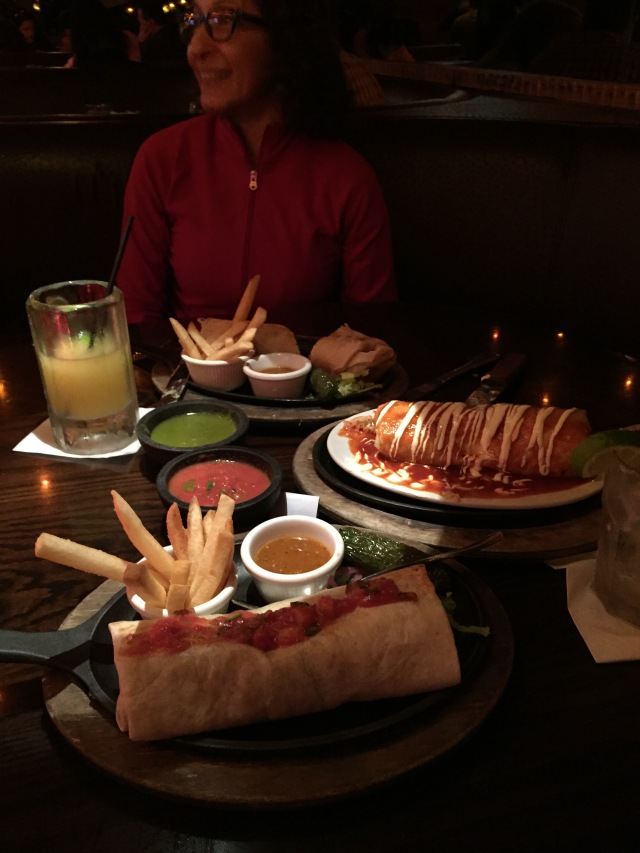 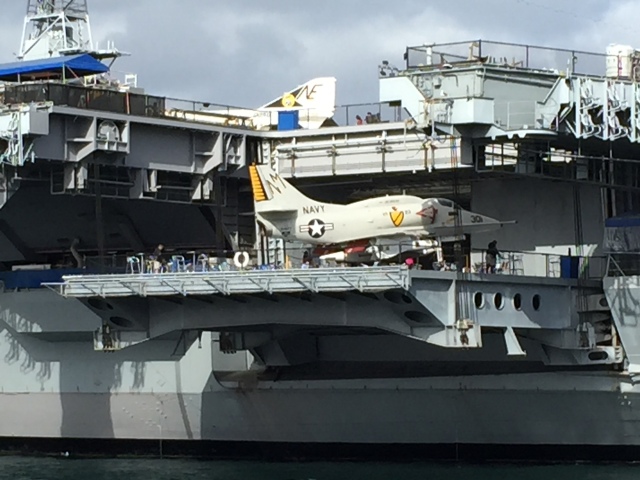 Commissioned one week after WWII ended, it was once the largest ship in the world. It carried a crew of 4,500 people, 136 aircraft and served 47 years.  A floating city.  Fascinating 3 hours touring the maze of decks.

After the Midway tour and lunch, we found a movie theater (it started raining) and saw Unbroken. Finished with dinner at home (Robin’s wonderful spaghetti casserole).

Prior to taking Em back to the airport, we went to Hash House (no…don’t go there) a go-go for one last big breakfast. 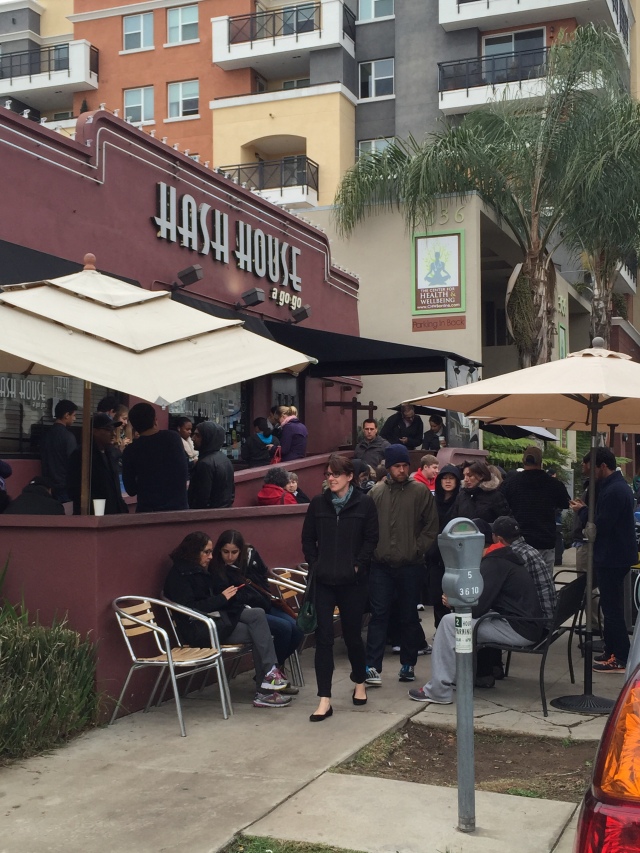 It was well worth the hour wait

We ate about half of our meals…still stuffed!

Thanks again Emily for joining us.  Glad you made it to all 4 corners.

Happy New Year to all our followers!  Be safe and thanks for following us!

This entry was posted in California, Uncategorized. Bookmark the permalink.