Our Trip From Calgary to Ogallala

The last four days consisted of very long drives, each with a stop or two to see something interesting, spectacular, historical, spiritual, or unusual.

Monday:  Calgary to Bozeman with an interesting stop.

One of the other guests at the Columbia Falls B&B (where Mark the innkeeper mapped out our trip into Canada) highly recommended we stop at the “Smashed-in-head Buffalo Jump” on our way from Calgary to Bozeman.  Not wanting to miss a good Buffalo Jump, we got up extra early and were on our way.

We anticipated driving out to the cliff site, reading a few plaques on the history of the place and how the indians got the buffalo to stampede off the cliff, take a few pictures, and be on our way.  It turned out however, that the site is a designated UNESCO World Heritage Site (like the pyramids in Egypt) and has a fantastic museum, theatre and site trails. 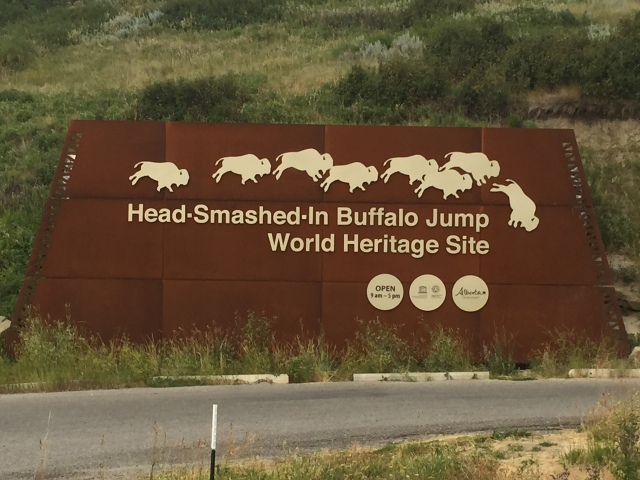 For the next hour plus we learned all about how (for over 6,000 years) the North American Plains Indians determined specific sites for buffalo jumps, how they induced the buffalo to stampede over the cliff, and how they used almost every piece of the buffalo for their survival.  Learning that these events took place before they rode horses or even had bows and arrows made it all the more impressive.  Hiking to the cliff site you can still see evidence of the V-shaped drive lanes lined with stone cairns leading  to the cliffs.  They even made a short movie depicting the preparation, ceremonies, and the hunt.  Very very interesting.

The Jump Site.  It was once twice as deep as it is today.

Oh, and the name.  We assumed the Indians named the site after all the smashed buffalo heads at the bottom of the cliff, but it turns out that during one of the hunts a young brave decided he wanted to see the event from behind the cliff.  So he climbed up from the valley floor to a ledge on the cliff where the buffalo jump off. How cool it must have been to see the buffalo falling to their deaths from the cliff wall!  Sadly more buffalo than usual went over the cliff that day and as they stacked up from the valley floor, the poor brave was trapped and eventually buried by falling buffalo.  When the tribe recovered his body, his head was smashed in.  And now you know the rest of the story.

Once over the border into Montana we made a quick stop to see the capital building in Helena,

then made the long drive to Bozeman, checked into the Country Inn and Suites, drove to downtown for dinner and took an informal drive tour of the Montana State University campus (go Bobcats).  We were very impressed with Bozeman.  The city is surrounded by beautiful foothills and has a wonderfully vibrant and clean downtown.

View from our room

Tuesday:  Bozeman to Billings with a spectacular side trip.

The normal drive from Bozeman to Billings is about 2 hours down highway 90.  We however, took 9 hours to get to Billings so that we could experience the Beartooth Scenic Byway, a stretch of US Highway 212 that lies between the Northeast entrance to Yellowstone National Park and the town of Red Lodge, MT.  The late great journalist Charles Kuralt (our generation will fondly remember him), called it “the most beautiful drive in America”, so we put it on our itinerary. 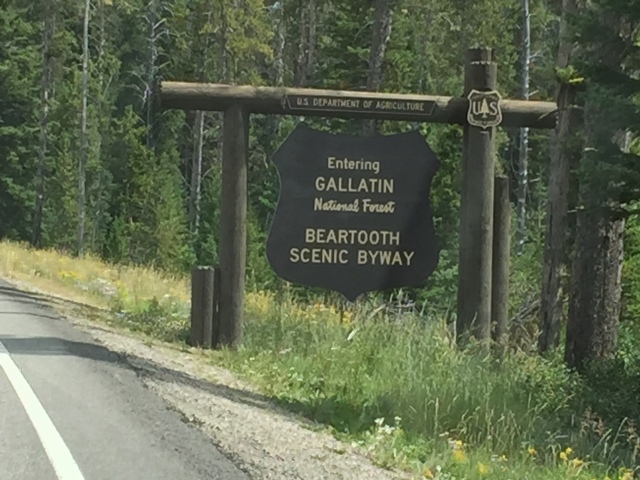 From Bozeman we drove into Yellowstone through the north entrance and had a nice drive through the Blacktail Deer Plateau where we saw several buffalo herds, some up close and personal.

Felt kind of bad about the visit to the Buffalo Jump after seeing these guys!

We eventually exited through the Park’s northeast entrance and onto the Beartooth Highway.  This 14 mile stretch of highway did not disappoint!  We quickly ascended to 11,000 feet where we had views as far as the eye can see of snow-capped mountains, mountain lakes, the endless switchbacks of the highway and countless motorcycles.  We both felt this view was the best of the day if not the trip.  Being above the clouds made it a bit surreal.

The ride down was especially harrowing as it consisted solely of steep cliff hanging switchbacks.  I don’t think we got past 25 mph the entire descent.  So much fun! 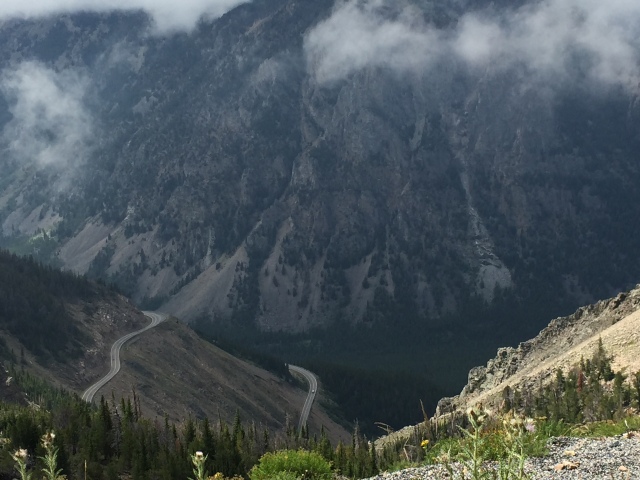 Glad we had the brakes replaced on the Old Home

Our great drive day ended with our arrival at the Best Western Plus Kelly Inn and Suites in Billings, Montana.

The Old Home looks pretty small in this parking lot

This thriving city, the largest in Montana, does not give one the same first impression as the cute city of Bozeman.  Not very picturesque, big in the coal, oil, and railroad businesses (Billings was former president of the Northern Pacific Railroad), and apparently growing like a weed due to the prosperous Bakken oilfields.

Wednesday:  Billings to Buffalo, WY with a stop to see something historic and something spiritual.

Two destinations caught our eye while reading our “1,000 Things to See Before You Die” book, Pompey’s Pillar and the Buck Horn Medicine Wheel. Pompey’s Pillar is a sandstone monolith on the banks of the Yellowstone River about 30 miles east of Billings.

“….this rock I ascended and from it’s top had a most extensive view in every direction…..The nativs have ingraved on the face of this rock the figures of animals …near which I marked my name and the day of the month and year” July 25th, 1806.

This quote is from William Clark’s journal and his signature and date, carved into the rock, is the only physical evidence “on site” of the Lewis & Clark Expedition. We just love this kind of thing!  It was easy to picture him on that very spot, seeing a lot of what we were seeing, listening to the river below, carving his name and date into the sandstone. 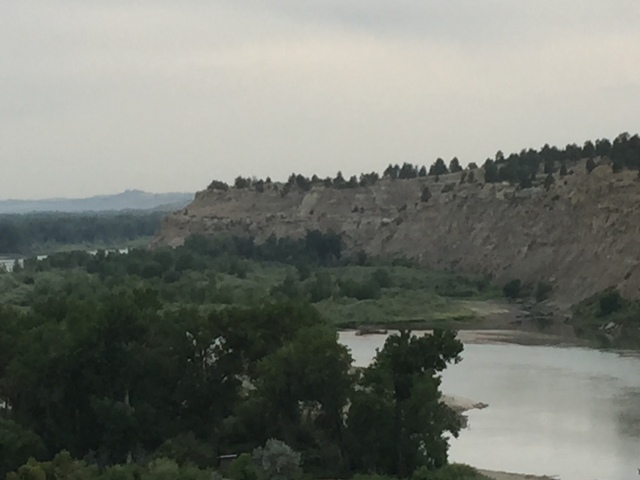 View from the top of Pompey’s Pillar

We also learned that he named the rock “Pompey’s Pillar” after Sacagawea’s son, Jean Baptiste.  The boy had been born a year and a half earlier and was given the nickname “Pomp”, which means “little chief” in Shoshoni.  The visitor’s center has a great museum detailing much of the history of the expedition through Montana.  Well worth the stop.

From Pompey’s Pillar we backtracked through Billings, picked up coffee and sandwiches and drove to the top of the Big Horn Mountains to see the Medicine Wheel.  Not much is actually known about this site, but it is believed that somewhere between the years 1200 and 1700 the native Indians placed the limestone rocks in the shape of a wheel approximately 80 feet in diameter with 28 spokes radiating from the central cairn.  It is also believed that the site had significant spiritual importance.  Judging from its location, we believe the archeologists are probably right.

We had a nice 3 mile walk to see the wheel and got back to the Old Home just before a big storm hit the trail.  Whew. 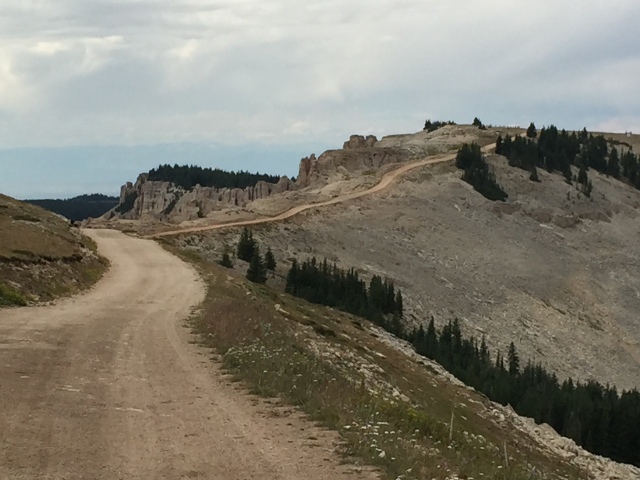 The walking trail up the mountain to the Medicine Wheel

Arrived in Buffalo, Wyoming and checked into the Buffalo Inn. 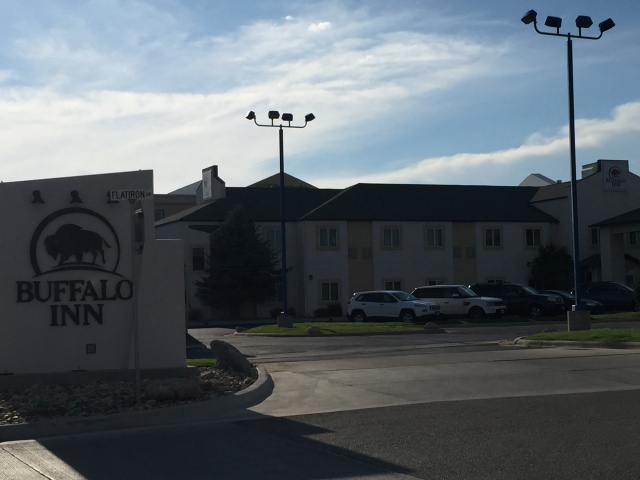 The Old Home at the Buffalo Inn

View from our room

And across the street from the Buffalo Inn we found the famous Winchester Steakhouse where we had a wonderful steak dinner complete with all the fixings! 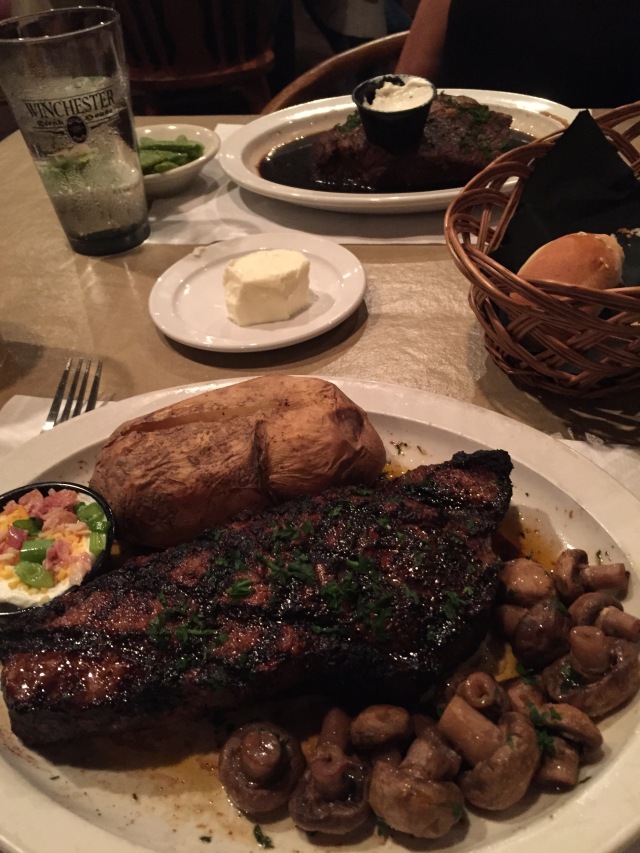 Also across the street, next door to the Winchester, was this local business….hmmmm 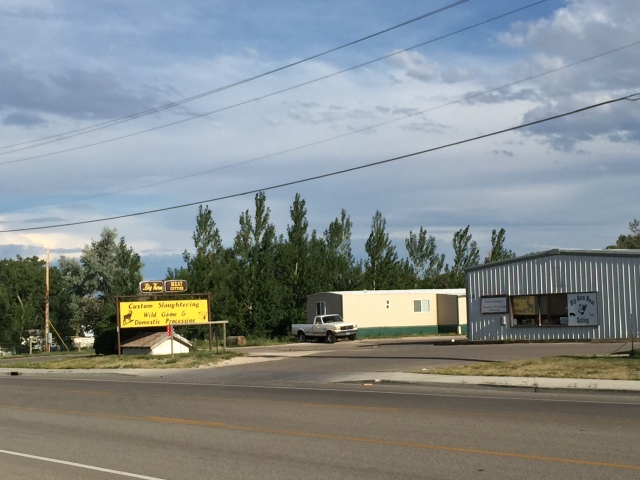 Thursday:  Buffalo Wyoming to Ogallala Nebraska with a stop to see something unusual.

Our goal today was to get at least half way to Omaha.  The problem was where to stop to see something of interest?  So we mapped several possible destinations and researched the routes looking for our day’s attraction.  We settled on a drive to Ogallala with a stop in Alliance, NE to see “Carhenge”!

According to the Carhenge literature, all 38 of the major stones at Stonehenge, England are represented at Carhenge.  Using vintage automobiles, Jim Reinder, with help from his extended family, constructed this memorial to his late father.  The autos were placed to assume the exact same proportions of Stonehenge, with the honor of depicting the heel stone going to a 1962 Caddy.

So bizarre I had to buy a tee shirt!

On our way to Ogallala (once a stop on the Pony Express and Transcontinental railroad) driving on highway 26, we noticed signs for the Nebraska Historic Trails.  Sure enough we were driving near the route of the Oregon trail.  Robin did some quick research and found Ash Hollow State Park, Ash Hollow being a branch of the Oregon trail.  Sadly we arrived past closing so we were unable to get information from the visitors center, but we were able to climb Windlass Hill where you can still see evidence of the route. 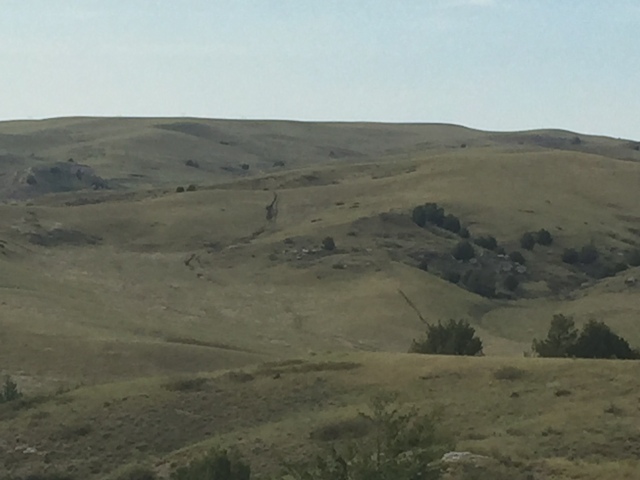 You can still see the actual wagon wheel tracks 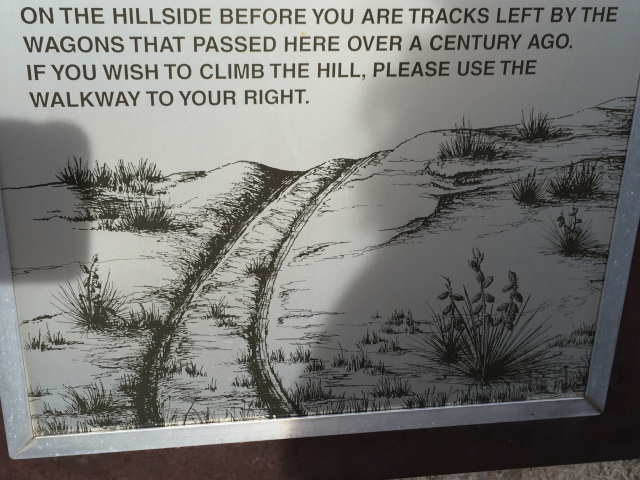 So we got to see something historic today as well….nice bonus!

Finally arrived in Ogallala and checked into the Holiday Inn Express.

Tomorrow we leave for Omaha where we are excited to spend the weekend with family and friends.

Here is a video of our Dances with Wolves experience:

This entry was posted in Canada, Montana, Nebraska, Uncategorized, Wyoming. Bookmark the permalink.

1 Response to Our Trip From Calgary to Ogallala