We had a very busy week since Katherine and Brian’s wedding and our rained out day in Roanoke, VA.

Tuesday:  We drove to Charleston, West Virginia and spent a long night at the Comfort Inn and Suites.  It turns out that almost everyone in this capital city smokes.  Old, young, affluent, homeless, male, female…….almost everyone. We first noticed it while walking around the city center looking for a place for lunch, but it was most obvious around our little cluster of hotels.  Every entryway was crowded with smokers, which meant the hotel smelled as well.  The halls, elevator, stairwells, reception area, and of course the rooms. The windows open but that just brought more smoke into the room, so we found a scented candle and made do.  On the positive side, Charleston does have a beautiful golden domed capitol building, and the capitol grounds are jam-packed with squirrels, so Wilma seemed quite pleased with the place.  We also had our first taste of Qdoba burritos (have seen countless franchises across the country but have never stopped for a meal) for lunch, which we enjoyed, and Subway for dinner…..which we tolerated (the food is fine, we’ve just been eating a lot of Subway lately). 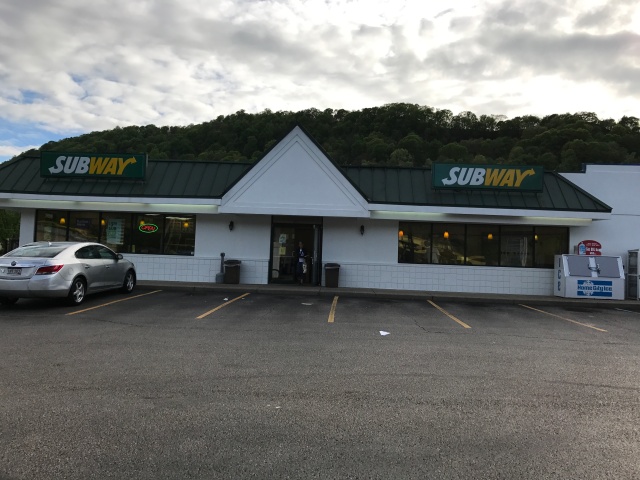 Robin with our dinner

Wednesday:  Arrived in Lexington, Kentucky to a nice (normal smelling) big room at the Residence Inn.  We found a great dog park for Wilma to get in a good workout, and met my (second) cousin (once removed….again), Amanda Lee (little sister to Katherine whose wedding we had just attended) for drinks at Ethereal Brewing, dinner at Goodfella’s Pizza, and ice cream at Crank and Boom.  Amanda is just finishing her Master’s degree at Kentucky specializing in Bovine Lactation (really!).  We had a great time with her and her cute dog Pippin, and really appreciated Amanda taking time away from her work on her soon to be defended graduate thesis work to meet with us.

Thursday:  Started the day with a short drive to Frankfort, the capital of Kentucky.  Those who have followed our blog these past years know our penchant for state capitol buildings. For some reason we can’t resist them.  So here is the building in Frankfort (along with its beautiful grounds).

Our nephew, Zach LeVay, is a freshman at the University of Indiana, so our next stop was Bloomington, Indiana.  Poor Zach was in the middle of preparing for his finals, but he took the time to give us a nice campus tour and join us for a great outdoor dinner at Farm. The campus is truly one of the nicest we have seen on our travels.  The grounds were perfectly manicured, many of the trees and bushes were in full bloom, and flowers were recently planted throughout the grounds.  They even have a small river and green belt that runs through the campus.  And the Gothic limestone buildings are amazing; we especially liked the Student Union.  Indiana is also known for its thriving Greek system, where almost 20% of the student body belongs to a fraternity or sorority.  The houses on campus are simply spectacular.  Not sure why we didn’t take more pictures but you have to see them in person to really appreciate them.

Zach in front of his Frat Delta Chi

Friday we finally arrived in Ann Arbor for nephew Josh LeVay’s graduation from the University of Michigan.  We started by dropping Wilma off at her care taker’s house (Becca, on the University swim team, took really good care of our Wilma), and having a wonderful dinner at Zingerman’s Roadhouse with Josh’s parents Debbie and Brian LeVay, his grandparents Hal and Barbara LeVay, and of course Josh.  I have to admit, it was kind of nice to eat a great meal without having a leash in one hand!

Saturday was graduation day.  We started in “The Big House” for the University-wide graduation ceremony.  It was freezing cold but fortunately dry (a large threatening rainstorm stayed just south of Ann Arbor all day), and we really enjoyed the presentations and setting.  Big Graduation was followed by a nice deli lunch at Josh’s house, then on to little graduation at Crisler Center (basketball arena) for the Engineering College ceremony. It was nice to see Josh march and be recognized.

Graduation in the Big House 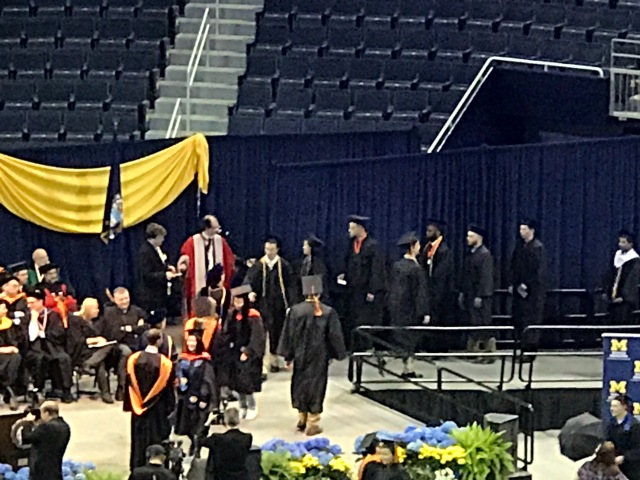 After a short respite at the hotel, we all met for dinner at Real Seafood Company (it was just OK as we had a bad waiter and some food problems…but the company was great) and ice cream at Kilwin’s (so Robin could get her toasted coconut ice cream). 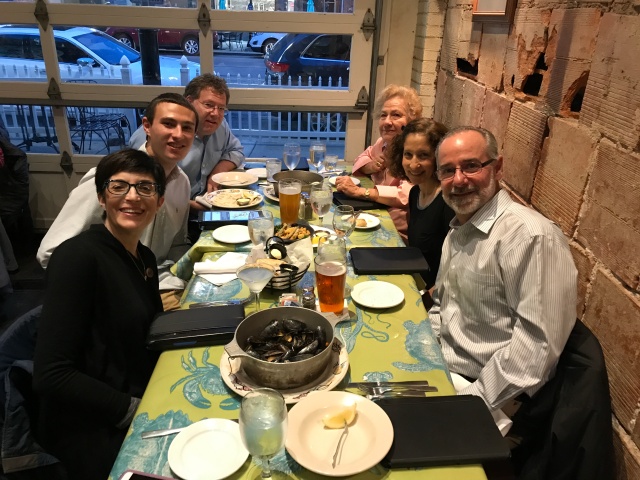 Thanks Brian and Debbie for hosting us all weekend, and congratulations to Josh on getting your BS in Mechanical Engineering!  GO BLUE!

1 Response to The Graduation