Having recently spent two months driving across the country and back with our stressed-out dog Wilma, we now consider ourselves pretty well versed on all aspects of prolonged vehicular canine excursions.  So last Sunday we reloaded the Old Home (including all of our new concoctions for battling doggy anxiety, doggy diarrhea, doggy anaphylaxis, and doggy nausea), and set off for the Martin Family Reunion, to be held in Vail, Colorado. This will be a relatively short trip for us, about three and a half weeks.  The first two and half weeks will be spent exploring new destinations while traveling to Vail, and the last week will be spent in Vail and driving home. Easy peasy lemon squeezy…..what could possibly go wrong?

Our first stop was Mendocino, California, a “hard to get to’ rustic community situated on the incredibly beautiful and rugged Northern California coastline. 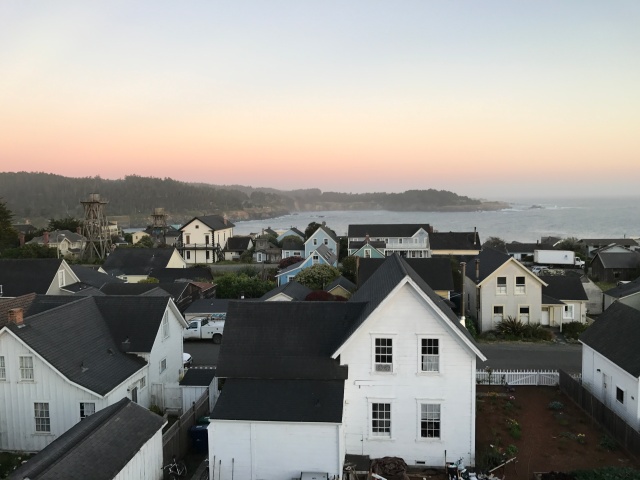 View of Mendocino from our rooftop

We have always wanted to visit Mendocino but the nearly five hour drive, much of which is through winding wilderness roads, has kept us away.  Plus, when we want to spend time on the coast, visiting the much “easier to get to” towns of Carmel or Pacific Grove (so nice to have those places to choose from!) are just too good to pass up. However, after deciding to take a Northern route to Vail, we saw our opportunity to finally visit Mendocino, and we took it.

Now those who have followed our blog are aware of Wilma’s issues with car sickness. Although she made great progress on our previous trip, we were able to avoid any prolonged stretches of winding roads (thank you highway 40).  She can manage five hours in the car, bumpy roads, and severe weather, but 40 miles of twisty, curvy, bendy, tortuous highway 128?  Not a chance!  And to make matters worse, the outside temperature for the first 30 miles of hwy 128 averaged about 110 searing degrees. Not exactly a “roll down the window to get fresh air” kind of situation.  So, in spite of a perfectly timed dose of Dramamine, Wilma lost it just outside of the town of Boonville (she actually vomited the first time at the Walnut Creek BART station, but we attributed that episode to drinking too much water and the stress of saying goodbye to Emily).  So…..no problem….just pull over, restrain Wilma (given time she’ll either eat it, walk in it, or lay down in it), gather our supplies and clean it up.  Well, not so fast……after driving on a lightly traveled road (with pull outs every 1/2 mile) for over an hour, Wilma happened to vomit just as we were entering the very town that was hosting the extremely well attended 2017 Sierra Nevada World Music Festival.  There was absolutely no place to stop, park, or pull over.  Just crowds of people walking up and down the parked car laden, street vendor filled, two lane road.  I’m driving very slowly in traffic, Robin is freaking out about Wilma’s next move, Wilma is just standing there…..deciding just how hungry she is.  It wasn’t a pretty sight.

I finally found a space in front of a guy selling barbecue sausages (110 degrees….why not a guy selling ice cream?), we cleaned up as best we could, sprayed some doggy deodorizer, and drove as slowly as possible the rest of the way to Mendocino.  Nice start, huh?

Our Airbnb residence is a renovated and re-purposed century old water tower located just a couple blocks from the ocean and the historic downtown. The four story structure includes a Widow’s Walk on the roof that provides spectacular views of the town and ocean.  The property owner is a master gardener, so the grounds were lush with countless varieties of plants native to the coast. 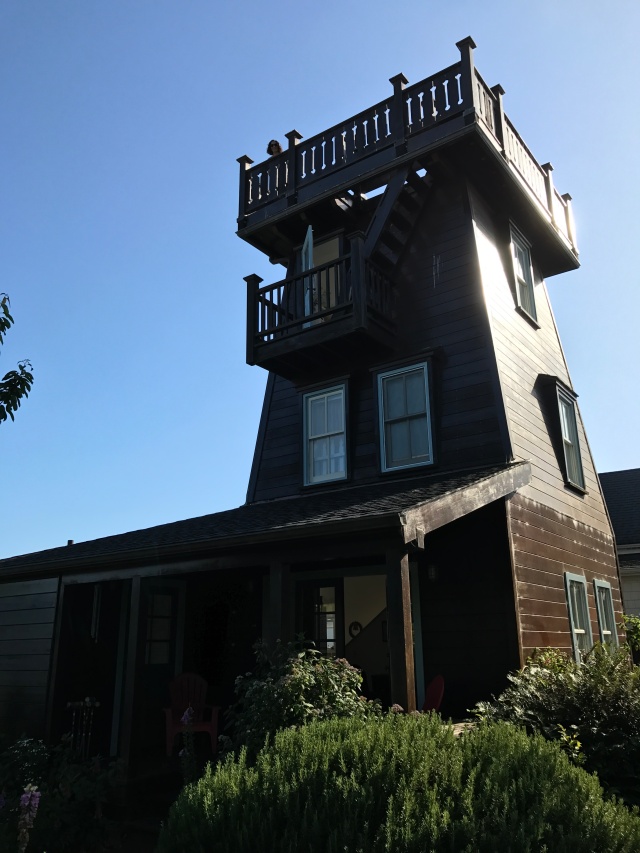 Can you find Robin in this picture?

After unpacking the Old Home and washing out Wilma’s crate pad, we took a really nice short hike along the trails in Mendocino Headlands State Park.  The coastline is truly a sight to see! 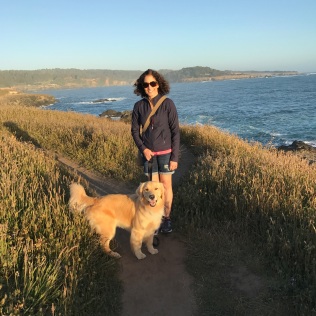 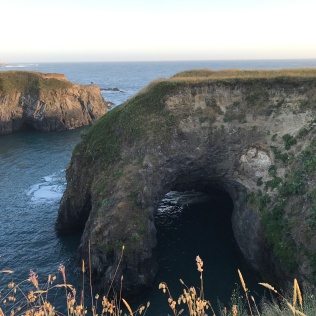 Monday we drove up the coast to Fort Bragg to hike the Fort Bragg Coastal trails.  We had perfect hiking weather (Wilma really appreciated the fog, overcast, and cool temperatures) and truly enjoyed watching, hearing, and smelling the powerful waves pounding away at the rocky coastline. 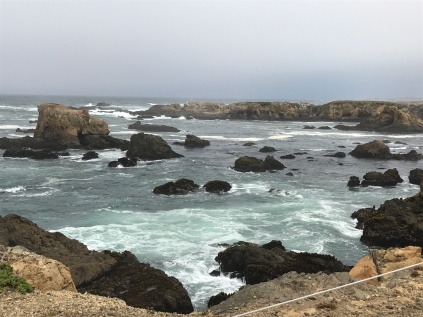 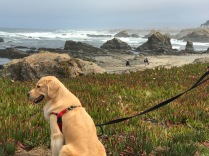 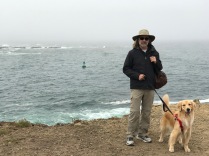 To cap off a great morning, we ventured into town and thoroughly enjoyed a couple bowls of cioppino at Silver’s in Fort Bragg. 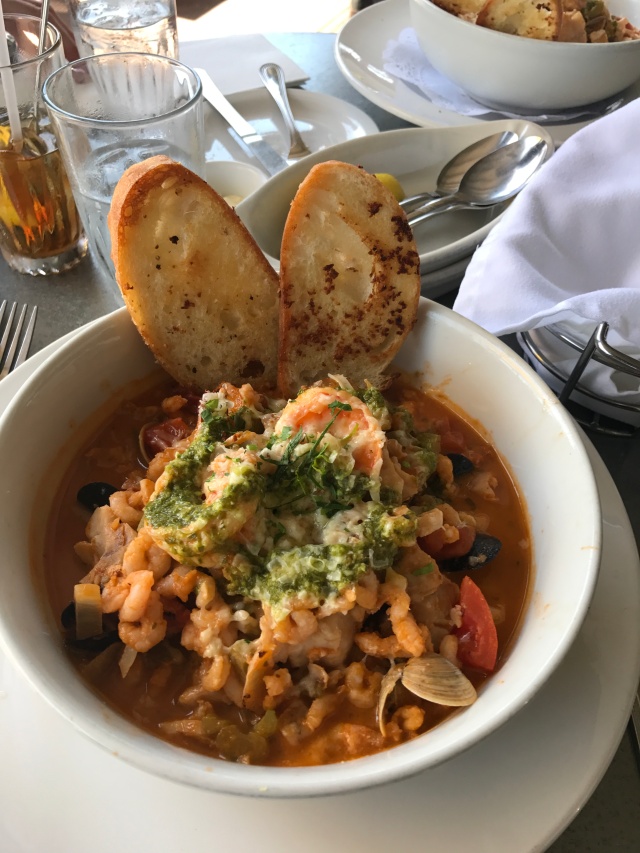 After all that fresh air and good seafood, we went back to our place and this happened: 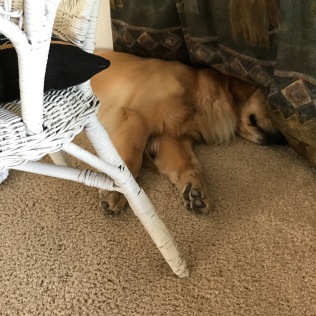 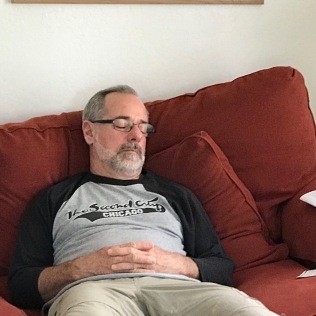 Monday evening we finished our leftover cioppino for dinner, took a nice long walk around town, and decided to spend the rest of the evening just hanging out and relaxing. Again…..not a chance!  Upon returning to our tower with its lush gardens, we had an unfortunate encounter with one of Mendocino’s native creatures……a skunk!  Robin and I never saw the critter, but Wilma sure did……and she went ballistic. We quickly lost control of the situation and you can guess what happened next…WILMAAAAAAA!!!  It was too late….the front yard was transformed from perfumy to putrid.  Oddly, it is not the same smell you occasionally experience at night while driving local roads with the windows open……it’s more like a burnt rubber meets rotten fish kind of odor, nasty none the less! Fortunately none of us took a direct hit but the night air was permeated with stink and Wilma got the worst of it.  She just stood there, frozen like a victim of Medusa, wondering……what the hell just happened here???   Poor thing got a complete hose down with liquid dawn (according to Google, the dish soap Dawn does the best job dissolving the grease in Skunk spray) which….thank God…..worked wonders.  So much for a relaxing evening! Miraculously by morning the yard was back to its normal fragrant self. Looks like the only casualties may be our shoes (currently sealed in plastic, waiting for a washing machine) and our lost evening!

We had only been gone one day…..what could possibly go wrong?

This entry was posted in California, Uncategorized. Bookmark the permalink.

3 Responses to And We’re off…..What Could Possibly go Wrong?